Around 6am this morning we celebrated the best-ever result for Lib Dems in a local election in Westminster.

Our candidates Alistair Barr, Elizabeth Botsford and Freddie Poser turned the Conservatives' rock-solid Marylebone ward into a marginal. We were just a couple of hundred votes behind. And if Labour hadn't polled so strongly in third place, we'd have won.

We did this from a standing start in barely six months, thanks to thousands of hours of doorknocking by dozens of dedicated activists.

The lesson is clear: campaigning works. We built up our vote day by day, week by week, by listening to voters on the doorstep and acting on their concerns.

We also launched some brilliant digital campaigning on social media.

I am so grateful to all our team, and to the people who donated time, money and skills to the campaign. Thank you!

Just remember -- in 2018 we didn't come second even in our target ward. For decades, Westminster Council has been a Tory fortress where only Labour is the opposition. Not any more!

Now we have to gear up for the general election.

That's where we need your help

Cost of Living Crisis - How Much Is Too Much? 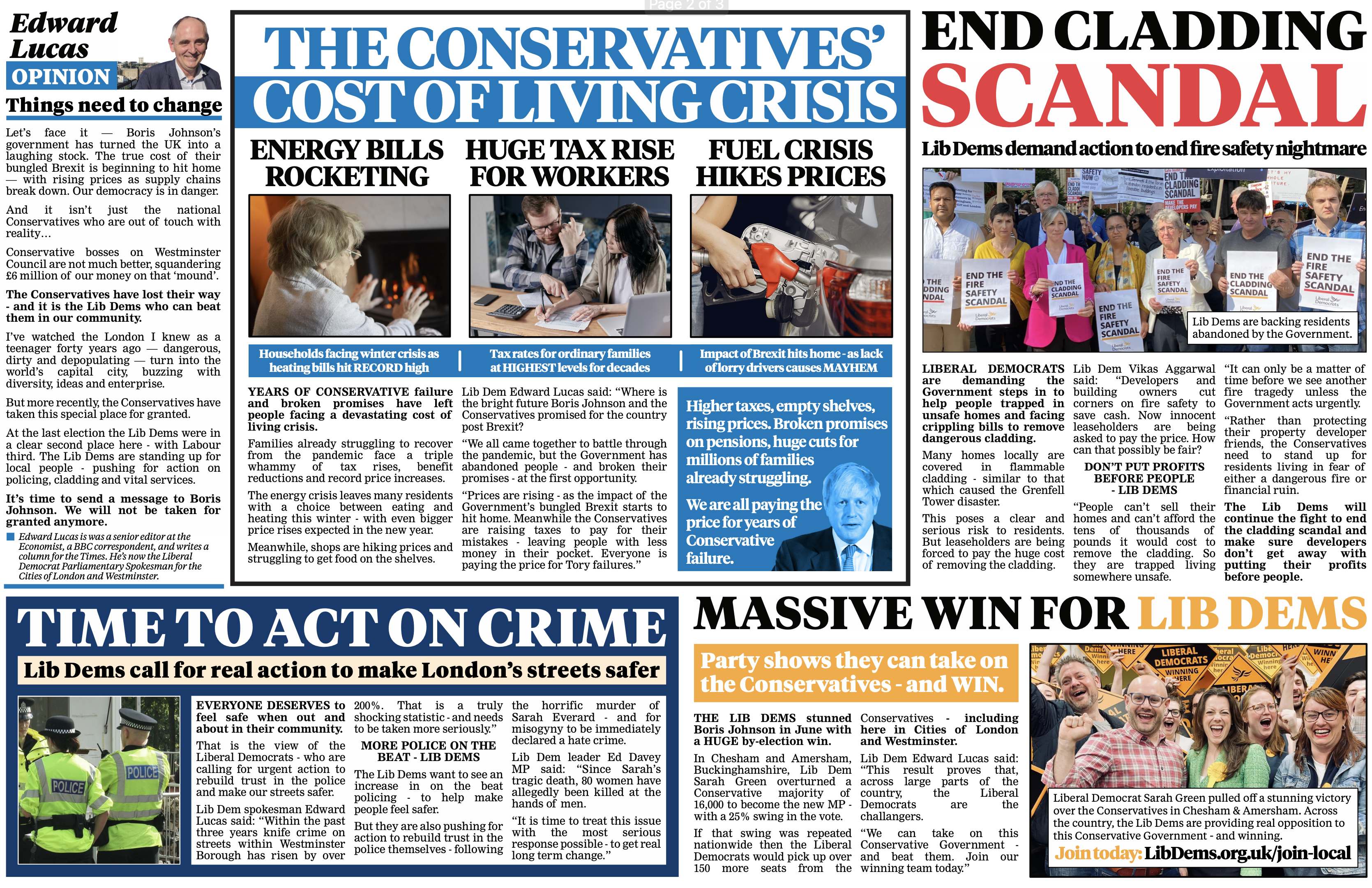 Edward Lucas is the Liberal Democrat Parliamentary Spokesman for the Cities of London & Westminster. 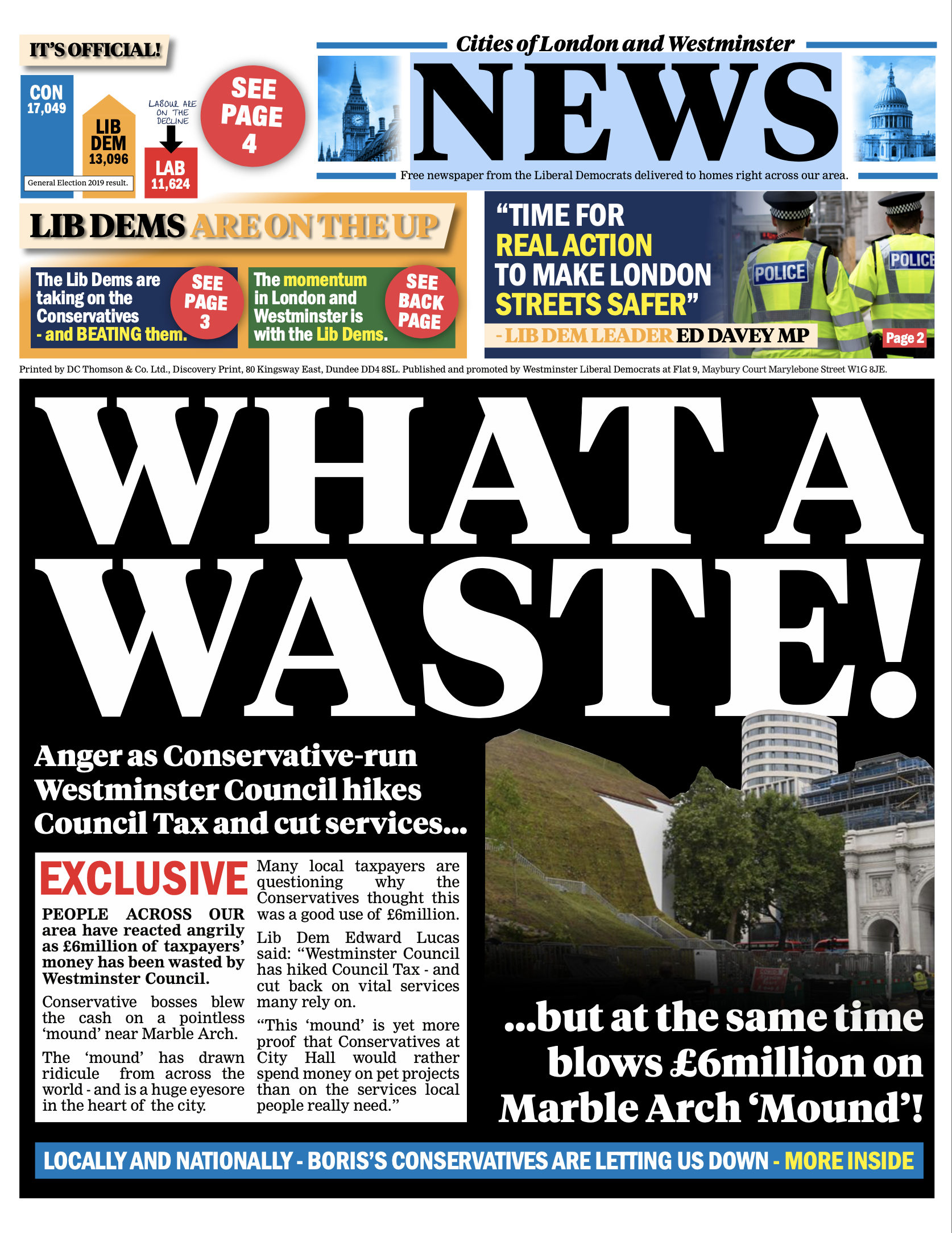 Edward Lucas, who is the Liberal Democrat Parliamentary Spokesman for the Cities of London and Westminster, said:

“Westminster Council has hiked Council Tax - and cut back on vital services many rely on.

“This ‘mound’ is yet more proof that Conservatives at City Hall would rather spend money on pet projects than on the services local people really need.”

Anger is the primary emotion felt at ground level, after Nickie Aiken's team blew £6million of taxpayers’ money on a pointless ‘mound’ near Marble Arch.

The ‘mound’ has drawn ridicule from across the world. Many local taxpayers are questioning why she thought this was a good use of £6million.

As a local party, we are committed to building a strong and cohesive LGBT+ community that is safe, free from prejudice, and thriving.

To celebrate our Parliamentary spokesperson, Edward Lucas meets with Edward Lord, Chair of the City's Establishment Committee leading on Workforce & Inclusion Policy and member of the Policy and Resources Committee.

Together we reflect on Edward Lord's life since the 80s and how much change has occurred since that time.

We also discuss the various campaigns and techniques to drive forward change for the LGBT+ community.

🎆🐅Wherever you are and whatever you are doing during the festivities, we want to wish you many blessings and a very happy Lunar New Year! 🎊

I am urging Nickie Aiken, Cities of London & Westminster MP to add her voice to calls for Boris Johnson to resign. Read my letter in full below. 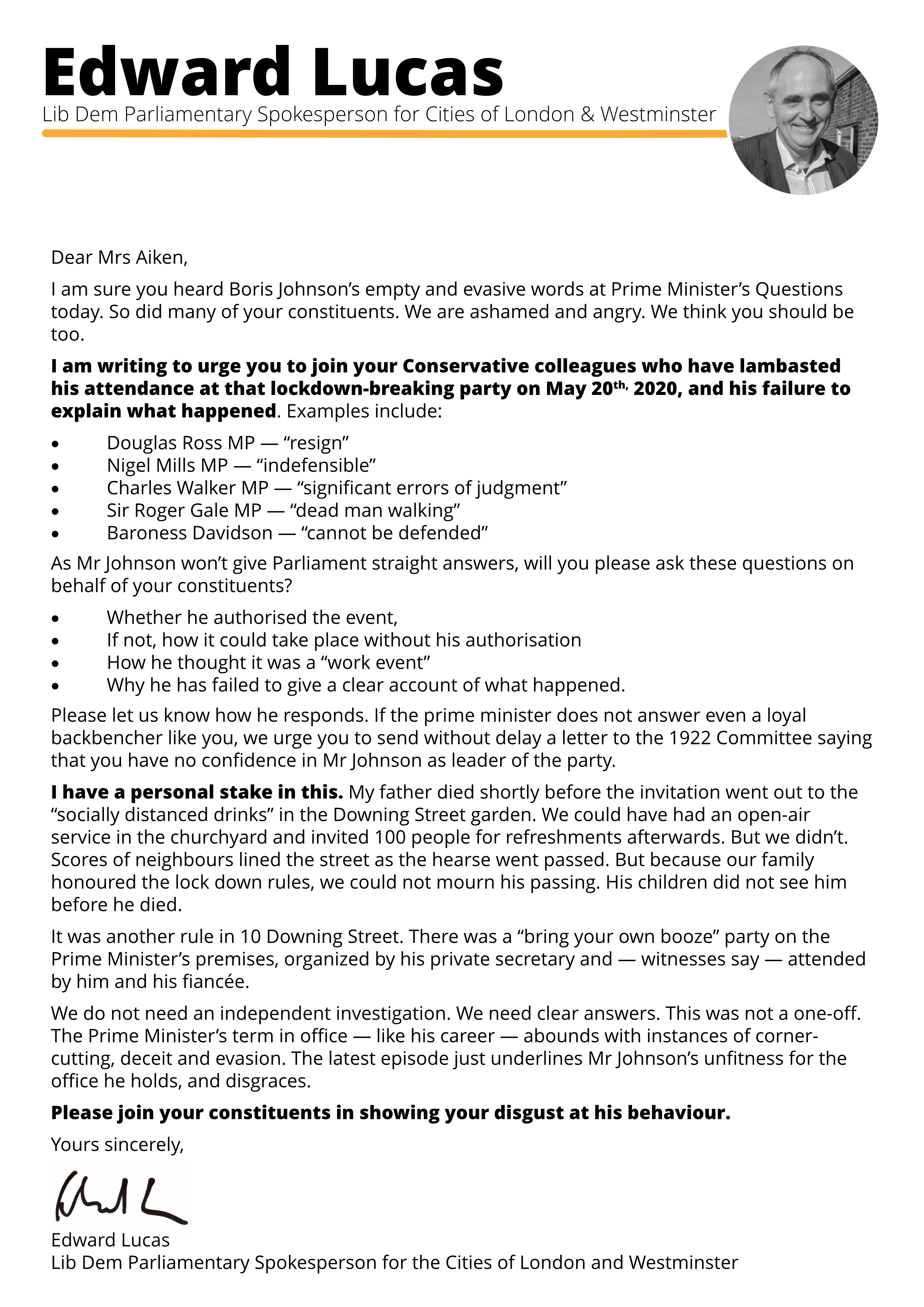 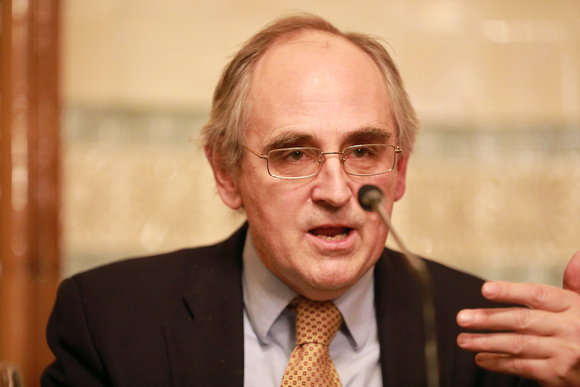 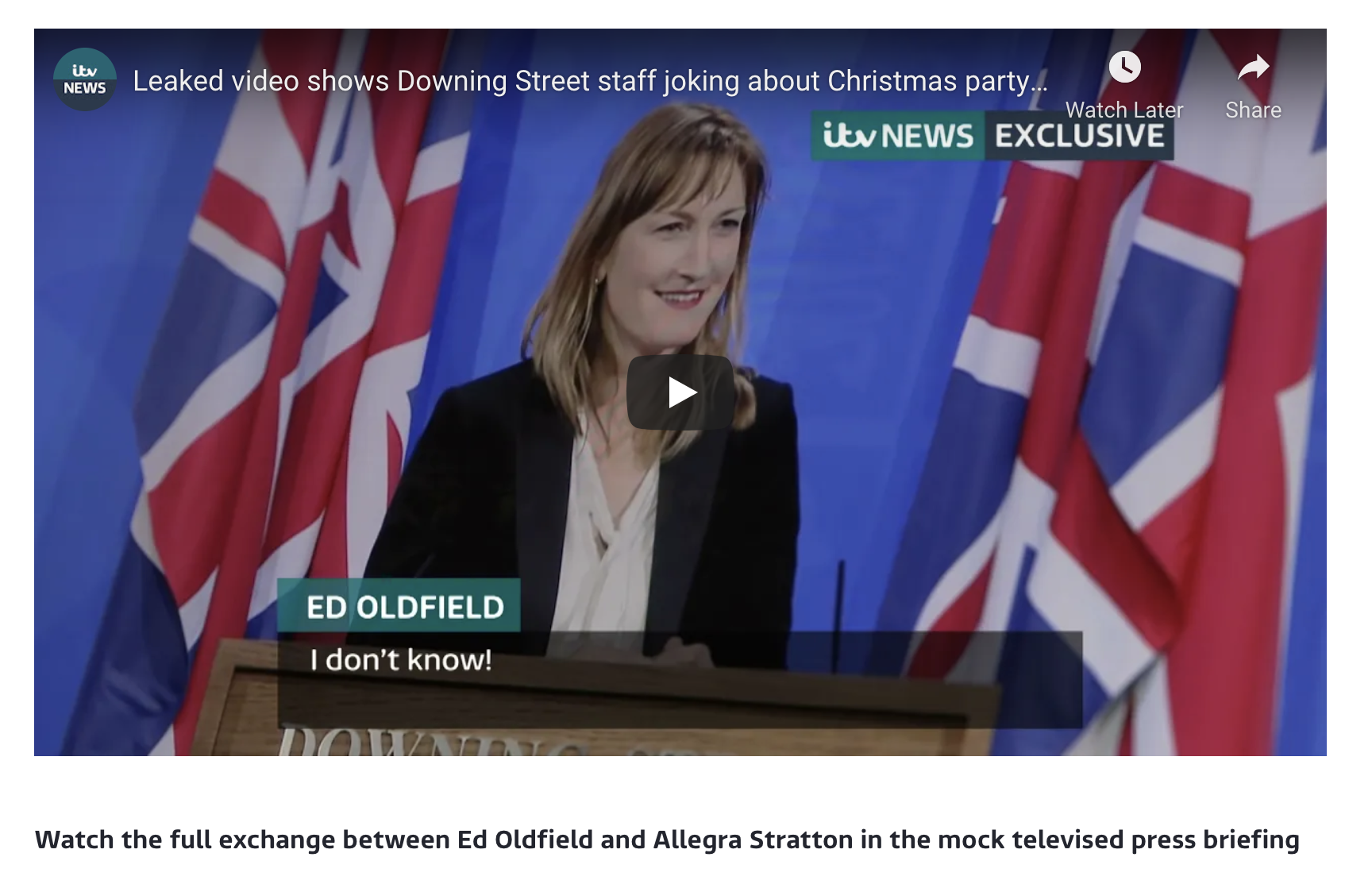 “Nickie Aiken, our Conservative MP in Cities of London and Westminster, must condemn Boris Johnson's behaviour and apologise on behalf of her party.

"Boris Johnson's Conservatives are taking this country for fools. People here, many of us living on Downing Street’s doorstep, will see right through his poor excuses and evasive answers.

“We spent our Christmas and New Year holidays away from loved ones.

Too many of us — including my family — lost loved ones to this awful virus. And because of the government’s rules, many of us were not able to say farewell or mourn properly."

"At a time of great sacrifice it is disgraceful to think that people in Downing Street were holding a Christmas party — and, worse, laughing about it"

"Enough is enough. We need an independent inquiry led by a neutral civil servant into government rule breaking during the pandemic; from Barnard Castle to this latest episode.

Lib Dem Leader Ed Davey called for the planned tax hike to be scrapped during a visit to North Shropshire to mark Small Business Saturday.

"Small businesses are the beating heart of central London” says Edward Lucas, Lib Dem Parliamentary Spokesperson for the Cities of London and Westminster. “We can’t leave the heart of our capital city to big business”

“This gimmicky tax rise doesn’t solve the social care problem. But it hits small businesses hardest — just as they are struggling to get back on their feet after the stresses and strains of COVID”

Research published by the Liberal Democrats has revealed the areas of the country with the most small businesses set to be hit by Boris Johnson’s manifesto-breaking National Insurance tax rise.

Furious? Ashamed? Me too!

I’m sure you are as angry as I am about the shambolic, disgraceful behaviour of Boris Johnson’s Conservatives. I’ve spent my life fighting for democracy in eastern Europe. I never thought it would be in danger here in Britain.

But we’ve seen this time and again in recent months: one rule for Boris Johnson and his friends. And another for the rest of us.

You and I — and any decent, normal person — would be ashamed to behave like this.

Yesterday Conservative MPs voted to scrap the House of Commons standards process, to spare their guilty colleague Owen Patterson even a 30-day suspension.

An all-party committee, including independent lay members, issued that punishment. The Tories wouldn’t accept it.

True: public outrage has shamed them into a “full-fat climbdown” — for now. But the lesson is clear:

Dirty money is choking our democracy —  for our country’s sake we need to get Boris Johnson out of Downing Street!.

It’s only by winning in seats like this — the Cities of London and Westminster —  that we can do that.

I’m already working full time on the campaign. But I need your help.

A handful of brave Tories voted against the party line yesterday. But our MP Nickie Aiken was not one of them. A week ago she couldn’t even vote to stop water companies pumping sewage into our rivers and lakes.

We deserve so much better.

Edward Lucas Selected for Cities of London and Westminster 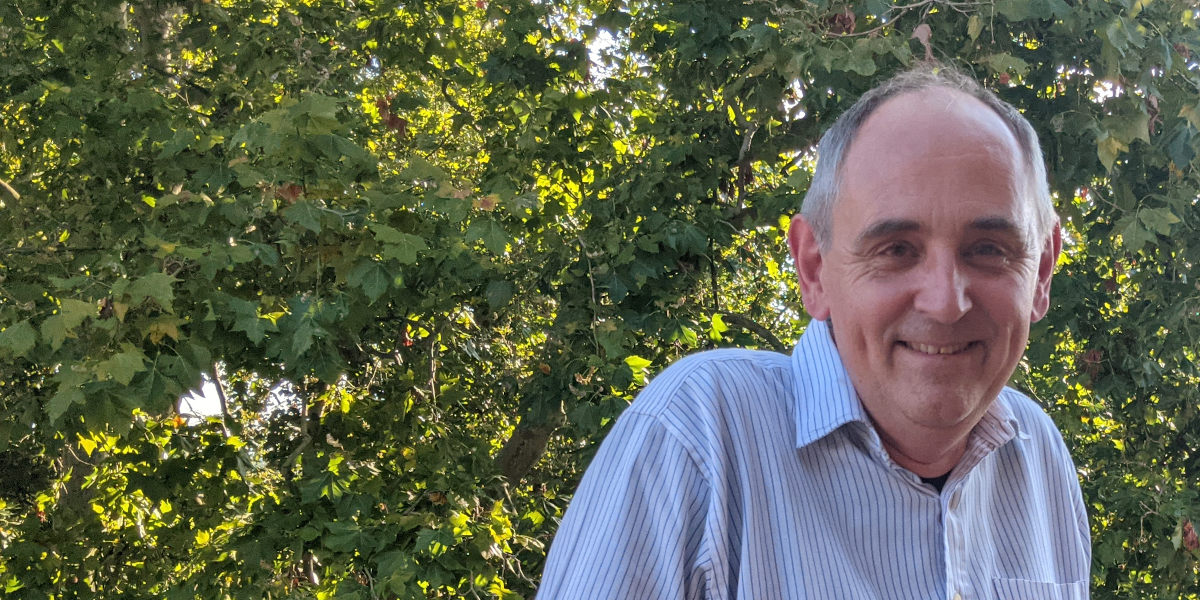 Author, European and transatlantic security consultant and fellow at the Center for European Policy Analysis (CEPA), Edward Lucas has been selected as the next Liberal Democrat parliamentary candidate for the Cities of London and Westminster.